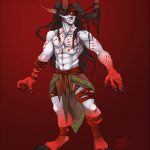 if tng characters had lizard babies

bev: unphased because she fucked a lamp ghost before, sends them to starfleet academy, somehow get better grades than wesley

worf: keeps them because it’s honorable, but his parents are the ones who raise them and they’re thrilled about it

data: researches the best heat lamps, spot despises them and he has to put up a baby gate

geordi: confused by the entire thing, gives them to data

deanna: keeps them, lwaxana continually buys them little outfits and wants to take them on vacation

miles: has an existential crisis, the babies do not love him, they destroy the transporter regularly, and then they abandon him first 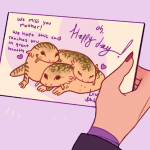 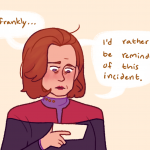 Gnoll and vorkai characters for a couple of folks who donated to my Extra Life fundraiser! 🙂

If it seems baffling to you how major tech companies keep getting taken in by NFT scams, yes, some of them are in fact running their own scam on the side and know exactly what they’re getting into, but another big part of it is that, in my experience as an IT contractor, the upper management of your average tech company is considerably less technologically savvy than your average Tumblr user.

That might sound implausible, but the thing you need to understand is that we’re talking about people who are perfectly willing to pay someone to read their emails for them. Many of them are so insulated from the day-to-day reality of modern information technology infrastructure that they’re functionally computer illiterate. You know that gag about the guy who’s so rich, he doesn’t know how to dial a phone call? It’s literally that, except a hundred times worse, because these people are so invested in presenting themselves as tech experts that they’ve bought into their own act and truly, honestly believe that they are tech experts. They get to the point that they’re not even consciously deceiving anyone – they’re so deep in their own bullshit that they’ve fooled themselves.

The upshot is that a great deal of the critical decision-making regarding online infrastructure falls to people who are very good at repeating buzz-words, but have only a vague and mostly incorrect notion of what the Internet is and how it operates. It’s completely true that many of the efforts to cram NFTs into everything are happening due to complicity, but my read is that at least as much of it is happening because the people in charge simply have no idea what an NFT is or does – indeed, lack the capacity to understand what an NFT is or does – and have no more concrete plan behind them than a pathological need to keep on top of the latest buzz-words.

The only saving grace is that most of the proposed NFT integrations that are ostensibly looming on the horizon probably won’t actually happen, because announcing that you’re totally on top of the next big trend and spending months grandly talking up your Vision For The Future™, then not actually doing it because it turned out to be slightly challenging is also standard operating procedure for these guys. 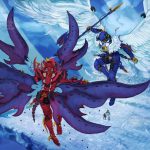 Warrior of Light Local Dragoon gets super pissed at his friend getting possessed, does something about it.

The maximum weight that a vehicle is allowed to carry on the Interstate System per federal law is 80,000 pounds gross vehicle weight (with a max of 20,000 pounds per axle). That’s 40 tons. That limit applies to every inch of pavement, not just the bridges. Since this is a known cap, a new Interstate bridge will be designed to accommodate an 80,000 lb GVW load on it. You could say the bridge’s weight limit is 80,000 lb/40 tons but that doesn’t really have much meaning, because a load higher than that would be illegal to transport on public roads anyway, and the road leading up to the bridge has the same weight restriction. (In practice, the bridge doubtlessly will be designed to have a little bit of let to it just in case some idiot tries to squeak by a few hundred extra pounds.)

Now, note that that law applies to the Interstate System only, because the federal government only has a governing interest in the Interstate System (and other roads that together make up something called the National Highway System) because they partially fund it. Most long-distance roads are owned and funded by the states. The states could theoretically set lower standard weight limits and/or design bridges with lower weight limits…but in practice they don’t.

One, because all of that 80,000 lb GVW traffic on the Interstate system has to go somewhere when it exits the system.

Two, because a group called the American Association of State Highway and Transportation Officials (AASHTO, who are best known for picking the road numbers) maintains a catalog of standard components for making bridges that meet Interstate System requirements. Engineers are expensive on a per-hour basis, so if you can direct your engineer to use standard components and make a standard bridge, that’s a lot cheaper than having them design a bridge from scratch to go over the creek in Nowheresville. As a result, most new bridges meet Interstate standards and have an 80,000 lb GVW rating even if they aren’t on the Interstate system. (This is also why all new bridges kind of look the same, but we’re not worried about how boring the bridges are for the sake of this post.)

So a bridge only has an explicit weight limit if it has been damaged in some way (through failure to properly maintain it usually) or because it predates the application of Interstate System standards and the standard AASHTO bridges.

Older bridges often have other problems in addition to the weight limits: many older designs are what we call “fracture critical”, which means that if one component of the bridge fails the whole thing collapses. Modern bridge designs have redundancy designed into them so that if one beam fails the other beams will carry the load until the damaged beam can be replaced. Older bridges also often don’t meet other standards, like height (16 ft clearance) and width (12 ft per lane plus 14 ft for shoulders) requirements.

Biden isn’t advocating eliminating weight limits and letting it be a laissez-faire free-for-all where trucks can just go wherever they want. He’s advocating for replacing bridges that carry weight limits with new ones that don’t have them.

wow i got absolutely schooled thank you for all this this is really informative. i have learned so much

This is a great explanation of what the fuck Biden was talking about in his tweet. because I will freely admit that I also went “…….wtf?????” when I read it. So thank you.