Down with the patriarchy. I am kind of liking season 13. Profit and Puerile Projects… by ~jubijub-pudding-man

Jubijub always draws the cutest goblins.  JUST LOOK AT HIS CONFUSED AND ANNOYED FACE!  So adorbs.  <3 appropriate use of the yak tag UGH OK DONE. for the draw drill of drawin a comic of 3 people or characters playing strip poker.

actually quite happy with how this turned out < w >

It’s one of the most misogynist things out there.

dictating how a woman chooses to express herself sexually is misogynistic 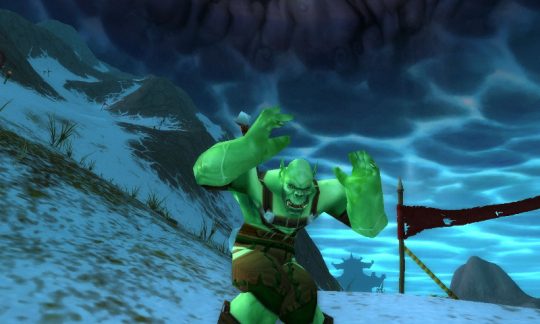 Lowly Peon v’s The Sha of Anger.
The result of a low level orc cowering on a Pandarian mountainside for a couple of hours, calling for “HOLP!”…
Deaths – many.
RP Experience – Priceless.
Heartfelt thanks to the players that indulged my character.

Let’s take a moment to appreciate the fact that this is a level 25 character. And that the player is the best ever.

LOWLY IS MY HERO. Beattrix considered herself a lady first and foremost, aside from being a death knight and having her duties in that, she was still a lady and there were certain symbolic notions she wished to bestow upon the three men whom she considered to be so dear to her.

The first of the three; a black pearl securely wrapped in the charm of a silver dragon’s claw — was gifted to Kae. To Beattrix he held an air of mystery about him but at the same time was so much of a kindred spirit. The pearl itself represented aspects of what she wished to bestow upon one of her favored knights; honesty, wisdom, and integrity. The ragged rough grain of sand transformed over time, slowly growing into a object of great value and beauty. With its humble beginnings, the pearl symbolizes innocence and pure heart — and while the innocence was all but gone, considering what they were… it was still just a symbol. One could still hold a sense of innocence to them while living a life of experience. She hoped that such a message in the symbol would help him get in touch with the simple honest things of life.

Kae’s pearl was black, and Beattrix hoped that it would help him filter his negativity and bring some prosperity to his existence.

ok this is super important so please please read this Five’ll get you ten that Kalecgos yells this to Jaina.

if i did these jokes would not be a thing