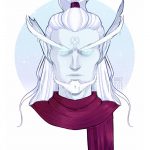 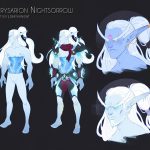 Meet Chrysarion Nightsorrow! I finally made a death knight the other day, and I already love him so much.
Chrysarion died during the war of the Ancients, sliced in half at the waist by a dreadlord of the Legion, and both halves of his body fell into a lake that froze over. He was raised as a death knight by the lich king ten thousand years later.

When he was alive, he was a spellblade of the queen, and he has two other brothers, who are still alive: Phoebion and Deucalion.

Can’t wait to draw more of this guy!!