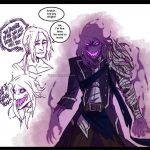 Ignore the outfit Anduin is wearing. I was trying to design a new outfit for him after his Arthas/Jailer phase but I don’t like it.

Anyways, I like the idea that after becoming a shadow monster and beating up the Jailer and Sylvanus, Anduin tries to brush the whole series of traumatic events off and that it doesn’t bother him (it does). Pretending he can’t hear the shadows whisper dark secrets to him, or that he’s not this close to losing his shit if the Alliance and Horde can’t get their shit together.

He also feeling guilty as hell for liking the new powers he has. He knows he supposed to be the holy priest, the boy bathed in light, but the shadows allow him to vent his repressed frustrations in ways the light never could.

Anduin knows he sliding down a dangerous slope, but after everything thats happened to him, he’s not sure if he can get himself to stop.