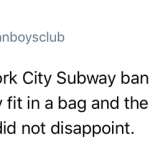 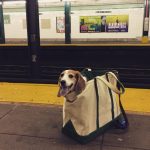 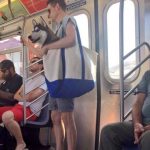 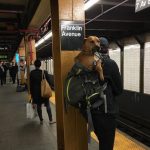 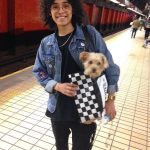 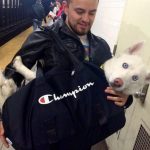 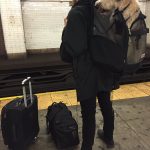 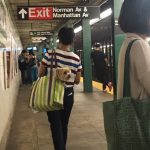 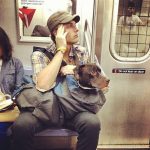 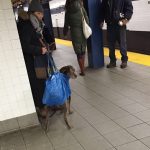 *cry-laughing as i hit the reblog button*

I’ve said this before, but this here is actually an example of a well-constructed rule, because it is both measurable/enforceable and relevant.  That is, you can tell at a glance whether someone is meeting the conditions of the rule or not, and the thing you can observe is directly related to the purpose of the rule.

If you’re running a subway and trying to decide whether somebody can bring their dog on it or not, the main thing isn’t how big the dog is–it’s whether the person bringing the dog has it under control.  A rule like “only dogs under 20 pounds on the subway” is enforceable but not relevant, because even a small dog can be a big problem on the subway if the person can’t control it.  “Only bring your dog on the subway if it can ride safely” is relevant but unenforceable, because you can’t tell whether a given dog is able to ride safely until a Regrettable Incident has already occurred.

But, if you can put your dog in a bag and pick it up, that’s a pretty strong indicator that you can prevent your dog from causing problems for other passengers (e.g., biting, humping, picking fights–particularly with other passengers who are also dogs–

unwelcome licking, urinating, etc.), and a subway worker can tell at a glance whether the dog is in a bag or not, making the rule both relevant and enforceable.

Yes, there are going to be some false negatives with this system–a perfectly-behaved large dog whose owner happens to have a bad back, for instance, will be prevented from riding the subway even though they would be fine.  But there are going to be damn few false positives, or dogs who should not be allowed to be in a metal tube full of strangers with limited opportunities to exit, but who are taken there anyway because they meet an arbitrary size limit and their owners lack judgement.

And if you’re operating the subway–or even just riding on it–it’s the false positives that you really, really want to avoid.  A false negative is only a problem for that one specific person who has to figure out a different way to get their dog where they need to go; a dog going berserk in the subway is a problem for hundreds of people at a time.  (Not to mention a massive liability issue, and a likely trigger for a complete ban on dogs in the subway, which would leave everybody in the same position as the large-dog owner with the bad back.)

My point is, if you’re making a rule or policy, be like whoever came up with the subway dog rule: identify enforcement criteria that are relevant to the rule’s purpose, and if you have to pick between your rule potentially allowing something it shouldn’t, or forbidding something that’s not really a problem, decide which of those situations is more important to avoid.