rafael g. is making a funny joke; there is literally no way in hell that kitty pryde, a teenage girl who makes feminist pop rap on her macbook, would feature on a kanye west album.

hundreds of people fall for it.

some friends and i are having a discussion about how the aaron tveit fandom is extremely gullible and would fall for anything. my friend spencer makes the following joke, in reference to the kitty pryde fiasco of two days prior:

i, of course, play along.

people immediately fall for it. 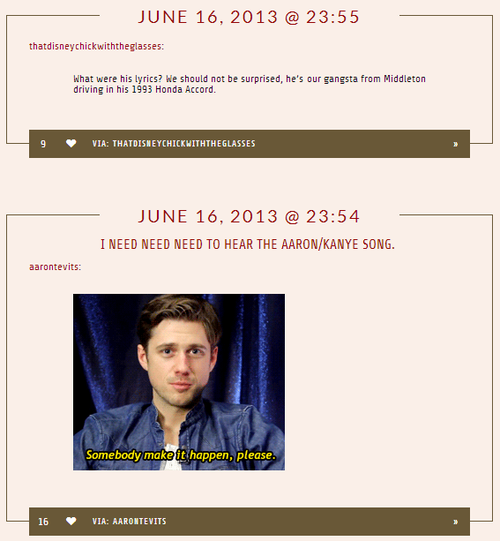 about forty minutes after spencer made the original joke, and after seeing all of the above posts and questions, i decide that it’s time to fiddle around in audacity for five minutes and produce a shitty sound edit in which aaron tveit’s voice is distorted around kanye west’s vulgar rapping. we can all have a good laugh over this shitty edit, i think, and call it a day. it will be immediately obvious to anyone who hears this track that it is not a real kanye west song and that aaron tveit, in fact, has no affiliation with kanye west, i think.