»suggestion that the more piercings an elf has, the more promiscuous

Yeah I kinda chuckled at that and thought of Reme like… 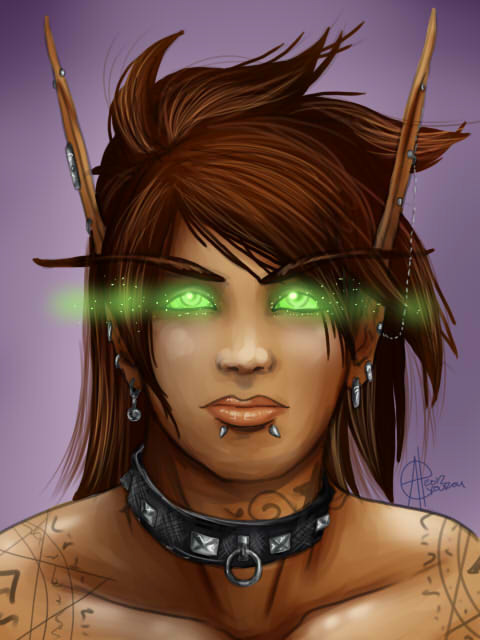 the last time I did the counting for his piercings he has over 30. XD

o__o That’s a lot of piercings.

(You should see An’belor. He’s got a real problem with anyone with an addiction (you know, like the entirety of blood elf society), but he himself is addicted to pain, so he’s covered in tattoos and piercings. He has 25 in his ears alone.)

Varaelian: 7 peircings, 4 on his right ear and 3 on the left. No other known piercings, but he does have several tattoos. 4 on his back, 2 on his chest, one at his neck, one above his eye and one on his leg.

Vaelios: 4 piercings, all high up on his ears. He had runic tattoos that extend completely across his beck, up his shoulders, down his arms and legs, though usually invisible.

Yes, yes… YES! The entire addiction to some types of pain — that is one way that Reme copes with many mental and emotional issues; oddly enough that were tied to and revolve around his past sexual encounters and former promiscuity, as well as bad relationships, and a smaller method he leans on to treat the fel addiction. The tattoos and piercings ARE for appearance purposes as well, but their main function (at least for him) is feeding his addiction for pain — and oddly enough (due to his training as a rogue-captain, and undergoing various methods to accustom his body to different types of torture so he doesn’t give in and leak important information) he has a very high tolerance for pain, so there are some times when getting a new piercing or tattoo doesn’t quite cut it anymore… and he’s had to seek other ways to sate that addiction without resorting to hurting others.

(Sorry dime! We sort of kidnapped your thread.)

Most of Varaelian’s tattoos aren’t even wanted. The one at his neck is more of a scar than tattoo. It was given to him when he was an infant, but grew with him as he grew up. It was a sort of promise or reminder to his parents of what sort of sacrifice they would have to make when Van got old enough. It’s in the shape of a clawed hand. It’s also to ward from harm and keep him safe, but he hates it and hides it. (Notice that he’s ALWAYS in a collared shirt?)

He had a very low tolerance for pain but I’m going to assume getting a facial tattoo above his left eye wasn’t easy to swallow either. Most of the ones he got were against his will.

They did help with that pain tolerance issue though..