Tevruden told me we need some feels and canon images; he won’t touch this one with a 10 foot pole, so here’s some Koltira holding his ears because of a bunch of undead spirits: 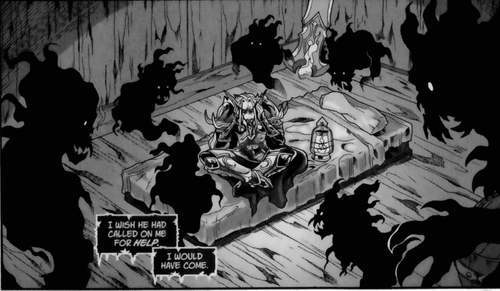 where does that image come from?

(Thank you, Barkentin, I was going to point that one out but I couldn’t find it anywhere and didn’t want to scan the book.

I assume it would for Death Knights since they’re already dead (sort of?) and communion with the departed would be rather easy.

But for the living, this would be even more torturous since they wouldn’t understand why this is happening, or why they would suddenly be able to see or hear them.

(That was an excellent chapter too.)

In the corresponding Dragonblight(?) quest, Arthas mentions that this is something that all death knights suffer from (and that Arthas kept them at bay.)

The panel before that one mentions that blood elves are especially attuned to it.