This is a character that needs a backstory I feel so, after doing a little research, here we go~

Chromie is in actuality a bronze dragon; bronze dragons apparently responsible for protecting and patrolling timeways and timelines so that time stays in check. So pretty much Chromie is a time traveling dragon-girl investigator :V (pretty cool~)

Dragon’s (as far as I understand) can also take the form of mortals (i.e dwarves, humans, gnomes, elves, orcs, etc.), and Chromie herself takes the form of a cute Gnome girl~

Curiously Blizzard has established that ‘male’ dragons come with the name suffix -ormu and ‘female’ with -ormi. Chromie herself prefers to go by Chromie but confirms that her original dragon name is Chronormu.

Hate to burst everyone’s bubble but Blizzard already did come out and say that Chromie is a female dragon with a boy’s name.

Yeah. I mean it’s great that everyone is so accepting of it but she’s not a transwoman.

I’m not going to rant. I’m really trying my best not to rant.. but I’m going to make one little point completely clear so that this does not happen again.

Chromie is a female dragon with a male name. This does not make them trans. This does not mean that we have a trans* character in world of warcraft as canon. As much as it would be lovely to have one, I am NOT about to throw that out there. Blizzard just recently became comfortable in throwing around canon gay couples.

Not all dragons follow the same naming guidelines, and Chromie isn’t the first case, and certainly won’t be the last…

There are at least 2 known gay couples in World of Warcraft.

The two druids in Hyjal (Tauren and Night Elf)

And then there are these who, who are flirting in the shrine: 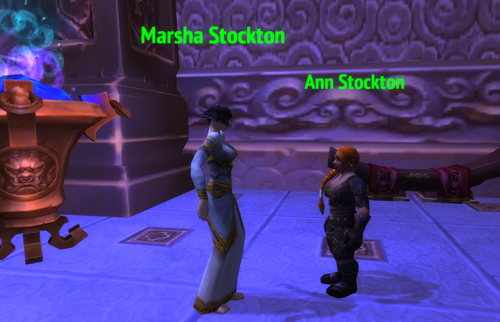