why does that belf have blue eues

omg elksy you have to stop

just enjoy the wowcraft fact and move on with your life

THIS IS UNHEALTHY FFS

IT’S NOT IN-GAME, MAYBE SHE REALLY IS A HIGH ELF

WHY IS IT A BLOOD ELF FACT THO

And that actually has me thinking, can High Elves actually be paladins? I mean, the only way the sin’dorei became paladins was by eating the Naaru, and the High Elves weren’t there for that….Eh, they prolly circle jerked with the humans and learned or some b/s.

aND IF SHE’S A HIGH ELF, WHY IS SHE ON A THALASSIAN CHARGER? YOUR DEFENSE HAS HOLES, EXECUTUS!

It is a blood elf thing though: 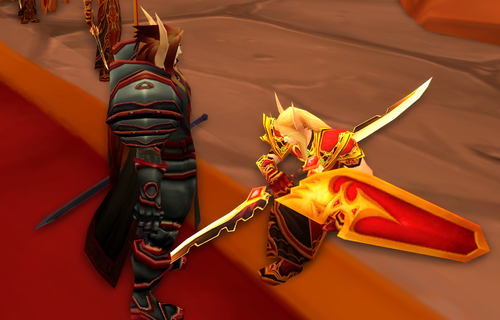 I’m to lazy to make a tauren paladin and cart him over from mulgore to see if it works with them but it doesn’t work with any other blood elf class.

And high elves, are at least able to visit the sunwell (which is apparently where blood elf paladins now get all of their sparklyness) or at least they were until 5.1.

Who knows about now.