im going to ask blizzard about this

i made a ticket

we got an answer 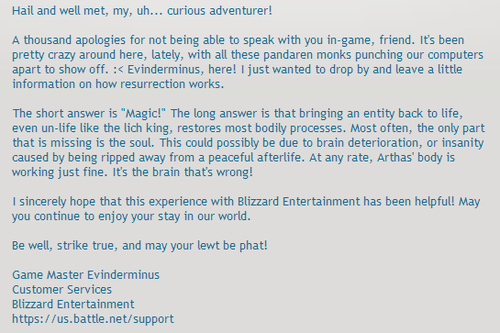 On one hand: LMFAO.

On the other, GMs are usually players interpreting lore (and sometimes game mechanics) just like the rest of us.

Yeeaah kinda my problem with it.  Don’t the lore Q&A things involve “here is a bunch of people assigned to actively going over information and double-checking and asking people before they answer”?  This is just some customer service person, so unless they ran up to someone who could decide these things then came back to the ticket…I don’t know.  Would they really go up to Metzen like “hey can Arthas get zombieboners?”.  Seems like it’d be kind of difficult.  Who decides on lore points like this besides Metzen?  What if someone official-enough did but Metzen would personally go lolno if asked?

I mean, once I submitted a ticket asking why the Blood Knight quests weren’t updated and the GM more or less admitted they weren’t sure, because game lore isn’t something that’s really involved in their job.  And I suppose a ticket response seems more positive when its “here is an answer” and not “lolIdunno”.  I remember being told that something you’re taught to say regarding customer service and long-ass queues is “Thanks for waiting” instead of “Sorry you had to wait” because it puts a positive spin on things.  I think that miiight be what happened here.

I don’t know, something bugs me about the explanation, seemed a bit lazy.  Zombieboners are all fine and dandy until you notice that “most bodily processes restored” miiight conflict with “no heart” because Arthas doesn’t like his internal organs apparently.  And then there’s the Death knight initiates that are killed on the spot in Acherus because “not dead long enough too emotional lol” and I just asdfghjk Idon’tknow.  If they had gone a bit more indepth about how dependant restored processes are on the associated organs or if its just “the necromantic energies will do it regardless of your missing heart/the person can consciously start it up” I’d probably have no issue with this.

Maybe I would’ve just preferred “use their necromantic energies to flap their dinky about/can direct whatever fluids to there if they’re bored with magic oooo~”.  Then again Koltira said he had internal bleeding in the starting quests I DON’T KNOW ANYTHING ANYMORE I just feel like this information is a bit shaky, sorry if I’m raining on a Dk-boner parade here.

Kinda what I was thinking.  I don’t feel like lore is canon if it’s given by GMs, unless it is already canon (like, someone wants to know something they can easily look up on something like WoWpedia but they’re too lazy so they ask a GM).

So yeah, this bothers me too.  I mean, it’s stated in-game by Sylvanas that Forsaken can’t procreate, which meant once they were gone, they were gone.  That’s why she had her mini-crisis about losing the entire race and decided to raise the Alliance troops that came to help Gilneas and were killed in battle.

If they (Forsaken and death knights) were reanimated with the same magic, I doubt “bodily processes have been restored”, because if that were true, then Forsaken could have babies.

Why does this even matter though?  Do we really want to give bad roleplayers permission to be bad?  I’m confused.

this ticket started out as a joke and look what happened

Relating to the bolded part: I’m sorry, this is probably going to come across as harsh, and I don’t mean to sound harsh. Personally, I get squicked by undead sex being a happy-go-lucky yay it’s awesome thing without taking into account things like, you know, the fact that you’re boning a dead body. But that’s my own personal squick.

Other people don’t have that squick. I can’t say that I understand WHY they don’t have that squick, but you know what? It doesn’t matter. I’m not them. As long as they’re not running around publicly waving around their wangs and saying, “LOOK THIS GM SAYS IT WORKS,” I don’t see why anyone else should care what they’re doing. They aren’t forcing people to RP undead sexytimes with them. Nobody’s forcing anyone to be like “yes this is good and I agree with it.”

Nobody needs PERMISSION to RP what they want. People who want to do undead sexytimes will do undead sexytimes regardless of what devs or GMs or random people on Tumblr say. And as long as they’re keeping it private, good for them. Hump on, you crazy necrophiles. Hump on.

Also I can’t believe this is still going around (she says as she reblogs).

can we not lore argue on my post please

look at all this text you generated 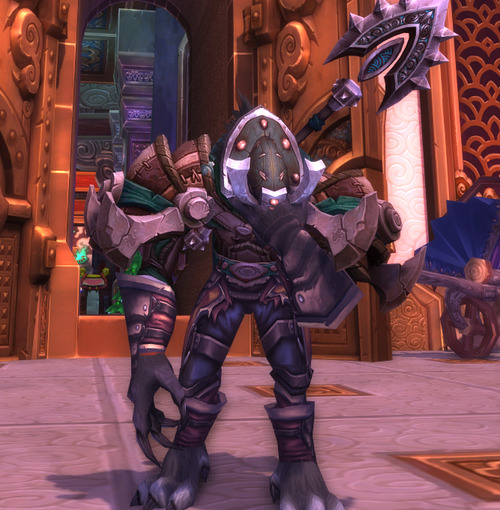