But in the bottom picture we clearly see there’s white, pink, and even purple candies in the bowl.

Yes the above image and the below image are not the same photograph being taken. This is rather obvious.

BUT Mr. Wright there is one thing you overlooked. Examine the droplets on the bottom image. None of them are from the same angle. This is a natural occurance when looking through water droplets.

Is it not possible that the photographer took the second image first?

Would it not be more probable that when asked HOW it was taken he/she took the above image of their setup Using M&Ms, something much more common in a household rather than many gumballs, something they may have just bought for the original photo?

So to claim it was not taken with the same camera is indeed a long shot Mr. Wright.

Thank you for your time.

Really Edgeworth, is that you’re argument.

Aren’t you overlooking the fact that there are no pink M&Ms. This proves undeniably that these are not, in fact M&Ms, but some other kind of candy.

And one other thing, I find it highly improbable that not one piece of candy is facing so the M logo is on the candy.

So in conclusion, there is no way these are possibly M&Ms.

hey mister I think you’re confuuuuuuused. Edgeworth agreed that they weren’t M&M’s. He was just refuting that there is a possibility there wasnt any photoshop used and that the above image was only depicting the method used in the bottom image.

I think someone might be getting a little senile hehehe

Everyone seems to be walking around the accusations by examining whether they are or aren’t M&Ms. That is not what’s important. What we should be looking at is instead, the so-called droplets, compared to the background image.

The angles within the droplets do not realistically coincide with one another! As well, I don’t spend much time staring at drops of water, but I can surely say I’ve never seen such clarity in any water droplet. Also, as in the former picture, there is an obvious fogging on the glass, surely caused by whichever process was used to spray the water. Where is the fog?

On top of all that, the drops are amazingly tiny compared to the anonymous-candy. One could argue the sheet is further away than in the ‘example’ pic, but the blurring of the candies definitely objects to that. We could also try to assume that the spray method used in the ‘original’ photo caused much tinier water spots, but are we to believe that the photographer was so careless that they couldn’t recreate the correct droplet size in the ‘example’? Surely, they should have been able to cause at least a closer resemblance.

Sure seems like they went out of their way to showcase the methodology of how the photograph was taken, yet neglected to go far enough to ensure it could be a like-comparison?

Well, according to the properties of light and the way it’s refracted…

If you mirror it the right way, they line up just fine!

So colourful… reminds me of the days of my youth!

the red ones remind me of my hemorroids… *cough*

I have found some new evidence though the original image source suggesting this second image has been tampered with! 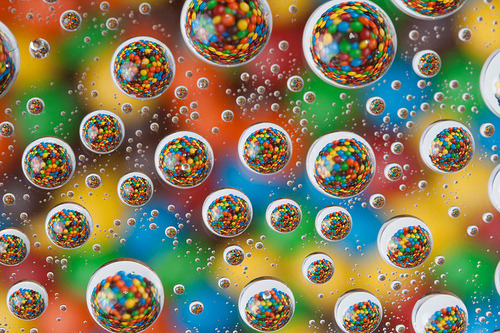 This image clearly shows candies that correspond to the colours commonly found in M & M s…  The edge of the bowl is visible, as are some ‘M’ symbols, if you look closely.

This suggests the second image in the original is perhaps just a fabrication based off of the second.

It is clearly a fraud!

You shouldn’t jump the “fraud” gun just yet, Wright. If your source is really the corresponding photo to the first, then the “gumball” picture in question might not be at fault. To put it bluntly, it might just be a copycat.

To put it another way, this could just be a case of a mistaken and mismatched photoset..

With all the evidence provided, I think it’s safe to assume this case could be solved: The candies in the second photograph are not M&Ms, but the photo itself was not exactly tampered with. It was just a completely separate photo of separate candies, possibly just misplaced in this set by the original poster, who was completely unaware of the mismatch!

Hold it right there everyone.

A PUZZLE HIDDEN IN THAT BOWL OF MISLEADING CANDY.

Oh my god its back