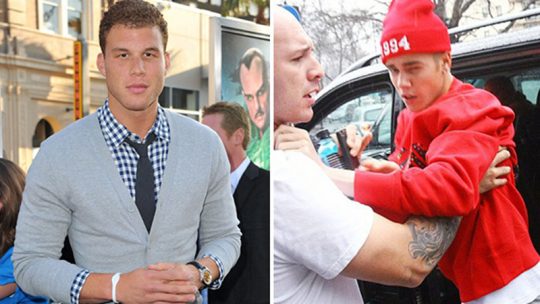 Justin Bieber simply can’t seem to keep himself out of trouble.  Police were dispatched this morning to respond to an altercation at a Starbucks in West Hollywood involving some familiar faces.  A barista at the coffee house was apparently confronted by Bieber  when he refused to serve the pop star because he wasn’t wearing a shirt.  “He came in with no shirt on and his pants hanging down and underwear showing and tried to order a caramel apple machiatto.”, said Joey Goldsmith, the Starbucks barista, “I just told him he would have to put a shirt on if he wanted to order.”  That’s when Bieber snapped.  According to the police report Bieber started cussing at the barista and threatening to have his bodyguard, “kick his ass”.

Fortunately for Goldsmith, LA Clippers star Blake Griffin had been enjoying a drink at a table when he witnessed  the altercation and stepped in.  Witnesses at the scene reported that Griffin tried to calm Bieber but the Biebs wasn’t having any of it. There was more yelling, and some pushing and that’s when Griffin smacked Bieber, knocking him to the floor.  “He smacked the shit out of him” said one witness, “then I saw Justin stumble out of the door looking like he was crying.”  Bieber was gone before police arrived at the scene.

SOMEONE FINALLY DID IT

GIVE HIM A MEDAL

GIVE THE MAN AN AWARD

Citizen of the year award?