Some friends who I follow on Twitter got a chance to meet him and he was rude to them. What happened was nothing out of the ordinary. These lifelong fans of Supernatural heard Jared would be at the airport and wanted to meet him. One of the girls who is only 16 has been a fan of Jared’s since she was 8!

These girls and their parents waited for Jared at the airport to get a photo with him.

When they finally saw Jared, they did what any other fan may have done if they had met their favorite actor in person, they went up to him and introduced themselves.

How did Jared respond? He shoved one of the video camera’s the girl’s mother was holding. You can see his hand swatting the camera away here: 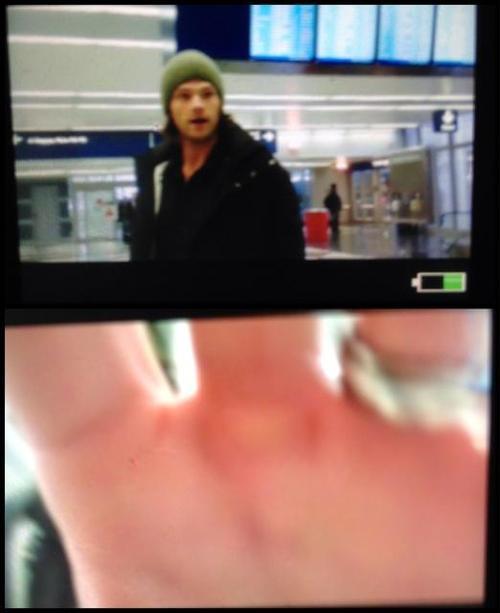 Jared basically gave the poor mother of these teen girls the “paparazzi” treatment and manhandled the video camera, shoving it away to stop her from recording.

You would think Jared could have simply said, “Please, no video” and that’s it.  I don’t believe this woman would have refused him. I know I wouldn’t. Would you? If your favorite celebrity asks you nicely to put a video camera away, most people would just do it.

These kids and their mom weren’t professional paps. They weren’t there looking for “the money shot” ; they were excited fans. The way Jared treated this parent is appalling. Can you imagine your own mom taking you to see a celebrity and him pushing her camera like this? I’d be livid!

During this time, Jared was also apparently yelling and being very rude. He actually told one of the girls that he couldn’t take pictures because I quote, “Some people actually pay to meet me.”

Yes, Jared, many fans pay money to meet you, which you and the rest of the Supernatural cast fully exploit yearly with dozens of panels around the world which give you some nice pocket change, wouldn’t you say?

I guess that’s the only way to meet a celebrity now? Spend hundreds of dollars in convention tickets, airfare and hotel accommodations.

Well gee, Jared, what about the average fan who isn’t rich like you are? What about those who can’t afford to fill your pockets with cash? We can’t be seen in your presence? Shame on us the poor fans then for sullying your image by asking you to take a goddam photo with us for free.

As if all this wasn’t enough, one of the 16 year olds got to take a quick picture with Jared and as she was gently throwing her arm around his shoulder, you know the way most people do when they take a photo-op with celebrities, Jared actually smacked her hand away!

So let me get this straight. A teen girl cannot touch you, Jared, she cannot dare put her little arm around you, but you, a male towering 6 feet and weighing probably 200lbs can smack her hand away? You couldn’t have just let her put her arm on you for 2 seconds as the camera snapped one lousy photo, or just said, “Not too close?” and then gently pushed her arm off you? Why smack it away like you’re some king and she’s just a peasant?

Is communicating with fans something that celebrities can’t do anymore? They’d rather play guerrilla tactics by shoving and smacking people around? And not just people, but women? Parents and teen girls?

I’m just so disgusted by all of this. I look up to Jared just like these girls but this is wrong and I know fans are immediately jumping to his rescue saying he was tired or overworked. So what? That doesn’t excuse this. And others are saying he is under contract. Why even stop them? Why even let people take photos and break your contract only to be rude to them and physically aggravating?

If you want to act like you’re so superior to people then just ignore them completely and don’t even stop, because you stopping just ruined these girl’s fantasy of 8 years that you were a nice guy.

This is a fuck ton of entitlement here, he owes you NOTHING okay. Absolutely nothing.  He is not your friend, he is not there TO MEET YOU. He was not there to be your friend or THANK YOU. He was traveling like hundreds of other people.

If these girls didn’t want to be a bother then maybe they shouldn’t have STALKED AND BOTHERED HIM.

Shame on them for stalking him and being invasive.  Shame on them for taking photos when he didn’t want them to. Shame on YOU for acting like he owed it to them, like the fact you watch him on TV gives you the right to a piece of his personal time. A piece of HIM.

He is not an animal in a zoo, he is not an object for you to fetishize  he does not exist to FULFILL YOUR FANTASY.

He is just a guy who acts on TV and you are ONLY enjoying his performances there.

It is a kindness when he stops to talk to fans.  And no they may not be paps in truth but they were acting NO BETTER than paps, and what makes it worse is that they called themselves fans AND STILL ACTED LIKE PAPS.

I am seriously tired of people thinking they deserve a piece of an actor’s time/life just because the call themselves a fan.

Is there anyone who isn’t horribly cranky after arriving at the airport?