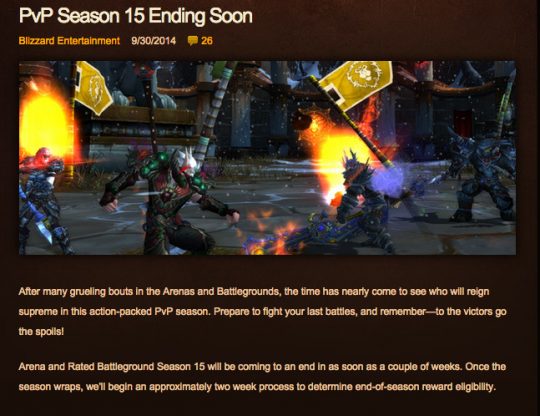 After many grueling bouts in the Arenas and Battlegrounds, the time has nearly come to see who will reign supreme in this action-packed PvP season. Prepare to fight your last battles, and remember—to the victors go the spoils!

Arena and Rated Battleground Season 15 will be coming to an end in as soon as a couple of weeks. Once the season wraps, we’ll begin an approximately two week process to determine end-of-season reward eligibility.

Qualified players should note the following in order to ensure you receive your just rewards:

Guess what that means, bitches: 6.0 drops in two weeks.
Mists of Pandaria is over. Anon has a burglar break in
talesof4chan.tumblr.com

Because we all love inappropriate questions about our OCs. The saga continues! This was like, uhh maybe my first attempt at trying line art? Since I’ve p much been painting since day one, and I wanted to see how far I’ve come. Thank you to all the amazing artists I follow for inspiring meeee aka me ripping you off Zul’dar, I have many questions about your weird-ass friends