Let’s all take a moment to appreciate this inn music.

what about jaina in garrosh’s clothing

good question let’s put it to a test 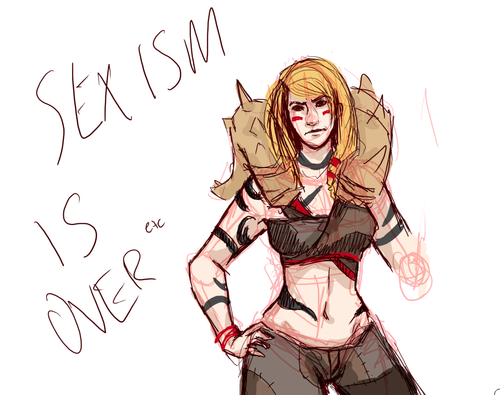 Can we just, I don’t know, have a new book ending like this please? Change it so Jaina Proudmoore isn’t thwarted by pussy Thrall and Niceguylecgos. Let her march across the fucking Great Sea, waterwalking while simultaneously shackling more water elementals to her will via the strength of the Focusing Iris. She arrives in Durotar and leaves Razor Hill little more than a glorified swimming pool before walking to the gates of Orgrimmar. Its unprepared grunts attempt to take her captive, only to have their respective races melted into an unrecognizable heap by Jaina’s fury. At her command, the elementals throw themselves against the walls of Orgrimmar, sending the city collapsing in upon itself and drowning every man, woman, and child unfortunate enough not to be on the high ground.

FUCK IT I’M DOING THIS MORE BELOW THE CUT.

Wait I need to reblog this again because of lines like

“Why anyone would antagonize her I don’t know. Garrosh Hellscream should be eating her out for forgiveness. Frankly I’d just eat her out anyways, but I digress. Jaina fucking Proudmoore doesn’t have to take that shit.”

“Twenty-five random adventurers walk in and begin squabbling over the pants-shaped “tokens’ that flew out of his chest piece.”

“I mean damn, she’s had the same transmog set for something like three years now.”

All of the other scenarios are actually fun. Why did they have us preview Theramore’s Fall.

what about jaina in garrosh’s clothing

good question let’s put it to a test

WELL IF BY “UNSETTLING” YOU MEAN “MAKING…